DOWN HOME BLUES – A short story by Balogun 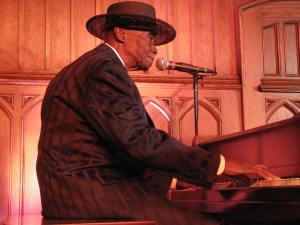 ‘James’ Juke’ was on fire.
Beads of sweat and salty tears rolled down Black Powder’s leathery, midnight-black cheeks and fell upon the yellowed, ivory keys of the old, baby grand piano in time with his haunting melodies.

“Sunday is gloomy,
My hours are slumberless.
Dearest, the shadows I live with are numberless.
Little, white flowers will never awaken you.
Not where the black coach of sorrow has taken you…”

The crowd pressed close together and cried right along with the old blues man.

Black Powder pounded the last note out of the old, worn baby grand, and then hunched over the piano; his creased forehead hovered a half-inch above the black piano keys. The blues master’s shoulders were motionless. His thin, crooked fingers pressed down upon the keys of the piano and did not move.

The hot, crowded blues club fell silent. Even the bartender dared not pop the top of a bottle of Heineken for fear of desecrating the sanctity of the silence.

Suddenly, Black Powder erupted into raucous laughter as he threw back his shiny, black head. The crowd answered his laughter with thunderous applause, whistles and stomping so hard it made the white candles on the circular lounge tables dance and shake.

Black Powder slowly rose from the piano and limped towards the front of the stage. James Dobbins, owner of the club and Master of Ceremonies, ran onto the stage and gingerly hugged the old man. James turned to the microphone, which rested upon a slightly tarnished chrome mic stand. “Give it up, y’all, for the legendary Witch Doctor of the blues. The Hoodoo Daddy of the Mississippi Delta…Black Powder!”

The club-goers clapped, whistled and stomped even louder. Black Powder blew the crowd a kiss and then slowly limped to the stairs on the left side of the stage. A young woman his wiry arm and helped him down the steps and into his seat at a reserved table, where ice-cold beer and a hot plate of catfish and hushpuppies awaited him.

“Alright, everybody,” James yelled into the microphone. “Next up, we have a young man, all the way from Skokie, Illinois, who’s gonna tear it up tonight.” James smiled widely. His pearly white teeth glowed lavender under the red and blue stage lights. “This boy and his band been shakin’ up the North Side of Chicago for the past nine months. Put your hands together – and let’s give a warm James’ Juke welcome to – the Professor of Bluesology…Howlin’ Maury Steinman!”

Howlin’ Maury darted up the steps and onto the stage. The Professor’s band sprinted closely behind him. Howlin’ Maury raised his thick, pinkish-yellow hands high and waved spastically. His black and red zebra-striped electric guitar bounced wildly on his rotund belly.

Maury looked up towards the ceiling and howled loudly, like a wolf howling at a full moon. “Ow-ow-owoooooh!”

The three, middle-aged black men who made up Howlin’ Maury’s band, responded to his call with a growl, a screech and a roar from an electric bass, a harmonica and a kick-drum.

Maury and his band jumped into an Impressive cover of “Mannish Boy”. The Professor of Bluesology did a great rendition of the classic, despite his nasal, Chicago ‘South-Side Caucasian’ accent.

In the middle of his set, ‘Howlin’ Maury’s band brought the music down to a whisper. “Are you guys having a good time?” Maury asked.
The sweating crowd answered with claps and whistles.
“It’s time for the Professor to start class,” Maury chuckled.  The crowd’s claps grew louder.

“Let me give you a little blues history, so you leave here with a bit more knowledge about this art form that we love so much.” Howlin’ Maury glanced over his shoulder at his band and shouted “Stool!” The harmonica player pulled a tall, wooden stool from behind a speaker and then handed it to him. The Professor of Bluesology lowered the microphone on its stand and took a seat on the stool.

“Now, contrary to popular belief, the blues does NOT have African roots, as once widely believed.”
Black Powder’s head jerked up from his last piece of catfish. “What he say?”
“The blues was actually created from a synthesis of slave field songs and European music,” Howlin’ Maury proclaimed. “That’s right, European music!”

Howlin’ Maury paused briefly, for dramatic effect, then went on with the lesson. “And the first blues song ever written was ‘Dallas Blues’, a song by Hart Wand, who was a white violinist from Oklahoma.”  Howlin’ Maury snickered as he wiped his fat, sweaty neck with a handkerchief. “So, who says blues is Black music, huh?”

A voice exploded from the crowd. “I do!”

“Who said that?” Howlin’ Maury inquired as he peered into the audience.
Black Powder slowly rose from his chair. “I did.”

“Well, if it isn’t the legendary Black Powder,” Howlin’ Maury said, with a smile. “With all due respect, sir, history does not lie.”

Black Powder shook his shiny, black head. “Naw, it don’t, but you do.”

Muffled snickers rose from the crowd. “You pissin’ in the wind and yo’ leg’s gettin’ wet, boy.” Black Powder said.

The Professor of Bluesology rose from his stool. “I am sure your experiences on front porches and in taverns in the Delta far outweigh my P-H-D in music history,” Howlin’ Maury said. “So why don’t you tell us the true history of the blues?”

Howlin’ Maury tossed the cordless microphone to Black Powder, who plucked it out of the air with surprising speed and ease. He noticed that the old man was standing straighter and seemed, somehow, stronger. A chill slithered up his spine and curled around the crown of his head.

Black Powder walked briskly up the stairs and onto the stage. The old man was standing perfectly straight now. “When I was a li’l boy, my gran’mama used to sang me an ol’ song she learned from my great gran’daddy, who was a Muhdinka from Africa. Gran’mama say the song old. As old as the Muhdinka peoples theyself.”

Howlin’ Maury chuckled and winked at the audience. “Looks like someone had a little too much catfish and now he’s burping out fish tales!”

Black Powder tilted his head to the side, closed his eyes and began to slowly rock back and forth.

Until a song escaped his lips. A song in a voice that sounded unlike Black Powder, yet like him at the same time.

…And that’s the origin of the blues, boy!”

James’ Juke Shook from the audience’s seismic applause. Black Powder tossed the microphone to Howlin’ Maury. The Professor of Bluesology was still, like an old, fallen oak.

The microphone struck Howlin’ Maury’s flabby chest with a loud thud, which made the speakers pop. The microphone fell to the stage floor and then shattered into scores of pieces.

Black Powder turned away from Howlin’ Maury, who was still frozen in place, and then slowly limped to the stage steps. The old man’s frailty had returned. Once again, the young woman took the old blues man’s thin arm and helped him descend the stairs.

Without a word, Howlin’ Maury and his band began to pack up and Black Powder sat down to another hot plate of hushpuppies and catfish.