WHAT IS STEAMFUNK? Exposing the Big Steampunk Lie! 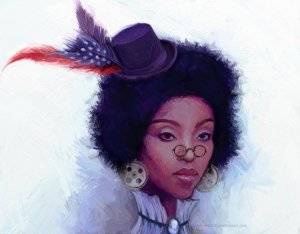 Steamfunk is defined as a philosophy or style of writing and visual aesthetic that combines the African and / or African American culture and approach to life with that of the steampunk philosophy and / or  steampunk fiction and cosplay.

For those who do not yet know what Steampunk is, you can read my blog – Why I Love Steampunk – here: https://chroniclesofharriet.wordpress.com/2012/01/23/state-of-black-sci-fi-2012-why-i-love-steampunk/.

Steampunk has the power to rip open the 19th Century’s belly and examine its clockwork guts – and to rearrange those guts in new ways – but most Steampunk authors – and indeed most Steampunks – choose to avoid the issues of racism, sexism, classism, colonialism and imperialism.

Steamfunk authors – thankfully – choose to address these very same issues, for we know that to avoid them – especially since there is such a wealth of Steampunk tales to be told from a Black perspective – is to perpetuate the Big Steampunk Lie.

Yes…lie; a lie by omission; also known as the ‘suppression of evidence’.

This type of lie is more subtle. It has the advantage that you can’t get caught in a lie, because everything that you say is true. You just fail to mention all of those bothersome little facts that do not support your point of view. Should someone point out one of those annoying – and unmentioned – facts, you can feign innocent ignorance, or claim that the fact is really just an unimportant, trivial detail, not worth mentioning.

Thus the Victorian Era / Wild West are represented in most Steampunk as merely an age of exploration and invention. A renaissance, if you will. A very interesting – and deceptive – way of describing an era in which the “explorers” who at best unintentionally – and at worst, and far more often, very intentionally – brought with them the forces of colonialism and imperialism throughout the world.

The “Wild West” of North America systematically robbed the indigenous people of their lands and murdered them wholesale while also oppressing and vilifying Asians. In the South and East of North America, people of African descent suffered horrors under the yoke of chattel slavery and things did not get much better after the Civil War. To romanticize such an era; to paint such a dystopian reality as a rose-colored (well, various shades of brown in Steampunk) utopia is the ‘Big Steampunk Lie’ of which I speak.

Now, I am not saying all Steampunk stories should be dark and foreboding. However, we should tackle issues of race, sex and class in our stories to some degree. So many incredible and thought-provoking stories are waiting to be told…if we care to tell them.

With the upcoming Steamfunk Anthology and with such already released novels as Moses: The Chronicles of Harriet Tubman, by Yours Truly and The Switch, by Valjeanne Jeffers – along with a number of awesome short stories from Milton Davis, Maurice Broaddus, NK Jemisin, Malon Edwards and Balogun (me) – these stories, which must be told, will be shouted from our Funkadelic Airships.