SWORD & SOUL: Much needed new genre? Or “simply something old, with a new coat of paint”?

Much needed new genre? Or “simply something old, with a new coat of paint”? 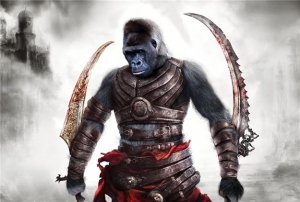 I grew up in a poor, tough neighborhood on the West Side of Chicago during the heyday of violent, organized crime. No, not the Prohibition Era mafia wars of the 1920s and 1930s. I am referring to the 1970s through the late 1990s, when gang crime was at an all time high. However, my experience was atypical and definitely broke all stereotypes of what “urban” life for an “at-risk” youth should be.

My family life was stable and possessing and displaying good character was stressed. Even the hardcore gang members would make sure you were going to school, staying away from drugs and reading comic books instead of hanging out with them if they deemed you to have the potential to do something better with your life. Hell, the leader of the gang in my neighborhood was an avid fan of rock music and paid me to teach him how to play Dungeons and Dragons. Like I said, atypical.

Perhaps the gang leader wanted to play D&D for the same reason I played; and why I read 20,000 Leagues under the Sea…and the Hobbit…and all the Choose Your Own Adventure books by Edward Packard and R.A. Montgomery…to escape. As atypical as my “at-risk” life was, it was still an “at-risk” life and I sought to escape it – and indeed, this world in which I, and my people, have suffered so much – and, for a while at least, explore brighter horizons.

Often, however, I felt trapped, even in books and in Dungeons and Dragons, because the world I escaped to was just like the world I lived in – one in which people of African descent are perceived as – and treated like – second class citizens at best; as demons, Orcs (now, zombies) and other evils of the world at worst.

I could find no heroes that looked like me. And the heroic fantasy I loved so much was constantly hurting my young feelings by telling me how vile I was.

I and my friends could tell you all about the Conan, Frodo, Fafhrd and the Grey Mouser and the Cthulhu Mythos. We knew nothing about Imaro. Had we known – Charles R. Saunders would be a billionaire by now. Anyhow, being highly competitive and wanting to one-up my friends, I went to every college library that let me in (which was nearly all of them; I was the “adopted son” of many a librarian) and researched the authors of these stories (Young Readers: a library is something we visited before the introduction of the internet).

I soon came upon an interesting poem by H.P. Lovecraft that inspired me to write fantasy fiction and to write all of my stories, from that point on, with a Black man or woman as the hero:

On The Creation of Niggers

When, long ago, the gods created Earth
In Jove’s fair image Man was shaped at birth.
The beasts for lesser parts were next designed;
Yet were they too remote from humankind.
To fill the gap, and join the rest to Man,
Th’Olympian host conceiv’d a clever plan.
A beast they wrought, in semi-human figure,
Filled it with vice, and called the thing a Nigger.

And then, it all made sense.

Robert E. Howard – the creator of Conan, the Barbarian and father of Sword and Sorcery – was a close friend and correspondent of H.P. Lovecraft. No wonder his works – like Lovecraft’s – were racist. Well-written, yes, but racist all the same.

Now, whenever there is a discussion about Robert E. Howard being racist, three main arguments are presented. The first argument is that Howard could not be a racist because he never participated in any racial violence. The second is that Howard was a product of his times and racism was as natural as breathing back then. And the third is that Howard’s fiction is no more racist than other fiction of that period. To these cliché arguments, I roll my eyes and answer:

Howard’s attitude toward violence inflicted on non-whites is visible in some of his letters. In a letter to psychopathically racist cohort, H. P. Lovecraft, Howard talks about a rancher who was investigated for the murder of a Mexican. “…just why so much trouble was taken about a Mexican I cannot understand” and in reference to a trial in Honolulu where native Hawaiians were accused of rape, Howard wrote, “I know what would have happened to them in Texas. I don’t know whether an Oriental smells any different than a nigger when he’s roasting, but I’m willing to bet the aroma of scorching hide would have the same chastening effect on his surviving tribesman.” Robert E. Howard writes approvingly of racial violence in more than one instance and in the letter to Lovecraft he has implied that he knows the smell of a “nigger when he’s roasting.”

As far as Howard being a product of his times and racism was as natural as breathing back “in those days”, this is what is referred to as “systematic” or “institutionalized” racism. It was indeed natural for the racist, for he benefitted from his actions and suffered very few, if any, consequences for those actions. The victims of systematic racism would beg to differ as to its naturalness though. Furthermore, I am a product of my times, I guess it is natural for us baby-boomers and Generation-Xers to sell crack, get infected with HIV and drop anthrax on Disney World.

Finally, to say that Howard’s fiction is no more racist than other fiction of that period is just ignorant…period. If I rob two banks, get caught and my attorney uses as my defense “Balogun hasn’t robbed any more banks than any other bank robber of this period”, they might as well add murder to my charges.

So, it was a burning desire to see myself in heroic fantasy – and the realization that none of the writing on the market that I had access to was going to satisfy that desire – that I started writing Sword and Sorcery stories with a Black man or woman as the hero. Much of the plot I took from the Dungeons and Dragons campaigns I created, so the settings of the stories were still pretty much medieval European, with an occasional adventure in Asia, as my friends were all caught up in the Ninja craze of the 80s. This continued until I went to college and started a serious study of African history to complement my lifelong study of African martial arts.

And thus began my writing of what I called “African Epic Folklore” at the time – my version of Sword and Soul.

What is Sword and Soul?

According to the genre’s founder, Charles R. Saunders, Sword and Soul is “African-inspired heroic fantasy.  Its roots are in sword-and-sorcery, but its scope is likely to expand as time passes.” Some of you might ask “Well, what is ‘Sword-And-Sorcery’, then?” The following are the defining tropes of the genre:

Although Sword and Soul has roots in Sword-And-Sorcery, it has grown into something inclusive of the genre’s tropes, but quite different. As Sword and Soul author, Stafford Battle, puts it – “This is more than brown or black skinned Conans stomping through the dense jungle killing monsters. You will find no white Tarzan characters dominating the local natives. Sword & Soul – at least in one aspect – is the retelling of our African heritage as Kings and Queens, conquerors, explorers, warriors, and dreamers who influence the evolution of world civilization.”

Looking back at the tropes of Sword-And-Sorcery, I can now understand why I was so attracted to the stories, even more than the “High Fantasy” of Tolkien. I lived in a dystopian world (and I continue to), wherein slavery, exploitation, repression, and the gritty, grisly horrors of war were realities. Conan faced these issues – and overcame them – with his wits, his iron will…and a Big-Ass Sword. Something I would have loved to do, had I been able to…or had I believed I was able to, but I only read about Caucasians saving the day.

Had my friends and I discovered Imaro back in the ‘70s or ‘80s, who knows, perhaps we would have taken up our Big-Ass Swords and saved the world by now.