Steampunk: What in the hell is it, really?

Steampunk: What in the hell is it, really? 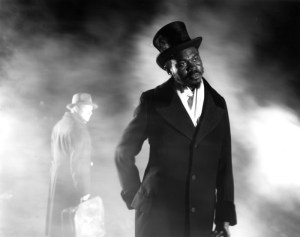 Many will argue that when H. G. Wells was writing, people believed in the possibility of time machines, making animals sentient and traveling to the center of the earth and finding live dinosaurs down there.

Now, if what H. G. Wells wrote was science fiction and most people agree that – along with Jules Verne – Wells created the model for anachronistic fiction (i.e. Steampunk, Dieselpunk and the like), then is Steampunk science fiction?

Yet, you find Steampunk on the fantasy bookshelves, not the science fiction ones. Unless, of course, the Science Fiction and Fantasy titles are, annoyingly, combined onto one set of shelves, a la Barnes and Noble.

So, is steampunk science fiction, or is it fantasy?

The Difference between Science Fiction and Fantasy

While Science Fiction and Fantasy share some characteristics, there is a clear and unambiguous distinction between them.

Jules Verne and H.G. Wells are two of the earliest true modern science fiction writers. Both stretched the bounds of what was known at the time to posit things that did not exist. Unlike earlier, and even much of the other speculative fiction of the time, though, they based their plot devices on extrapolations from current science and technology. Previous visits to improbable lands, encounters with strange creatures, and even fictional travels through time were often the result of a dream or mystical insight. Both Wells and Verne presented their readers with fantastic machines, but these were based on scientifically explained principles. They included strange creatures, but they were natural rather than supernatural, with abilities explainable, at least in theory, solely in terms of biology and evolution.

Fantasy is less constrained. It can include just about anything – magic wands; fire-breathing dragons; shiny, shimmering vampires; werewolves; genies in lamps; lizard men and sentient swords. These things just ‘are’ and don’t need to be explained from a scientific perspective.

While the magical elements must be internally consistent, they do not need to be based on known science. If the story includes supernatural or mythological characters or forces that are not supported with plausible sounding techno-babble, then it is fantasy.

When asked to explain the difference between science fiction and fantasy, Isaac Asimov, the prolific writer of science and science fiction, replied, “Science fiction, given its grounding in science, is possible; fantasy, which has no grounding in reality, is not.” We authors can – at times – be quite presumptuous and this statement is presumptuous to the nth degree, as Asimov implies that he knows everything that is possible and all that is real. He doesn’t (didn’t – he passed away in 1992). We don’t.

He is saying that fantasy proposes the existence of things we cannot yet explain rationally. Science fiction, on the other hand, must present some rationale for how such things could exist and demands a plausible theoretical explanation rooted in what we currently know. The explanation does not need to answer such questions in detail, but the reader must feel that a scientific explanation is possible and links back to our current scientific understanding of the real world.

Science fiction is supportive of a scientific outlook and optimistic about humanity’s ability to use science to explain the universe and create a brighter future. Fantasy, which has a mystical basis, supports the idea of the existence of things science cannot explain or deal with.

There are those who believe a magic wand is no less implausible than a TV remote control or that the binary system of African divination is as viable as Boolean logic. Both types of people can, however, read and enjoy science fiction and fantasy.

Stories from both genres can be insightful, thought provoking and evoke a sense of wonder. Both genres can take us to strange and fascinating worlds.

Now, there are stories in which both magic and science work, science is so sophisticated it simulates magic, or characters possess psychic powers so strong they resemble magic. A term that has been applied to these stories is ‘science fantasy.’

So, if Steampunk is, science fantasy, why not just call it – and Star Wars, Van Helsing and time travel stories, for that matter – fantasy?

Well, even the best Steampunk story – a story like Moses: The Chronicles of Harriet Tubman Books 1 & 2 (shameless plug) – may not appeal to someone who strictly enjoys high fantasy. A pure fantasy reader may not appreciate a story with a dwarf who wields a steam-powered war-hammer or an elf who pilots a dirigible.

The hard science fiction fan would, most likely, loathe the inclusion of Orcs, fighting alongside the Cassad Empire in the far reaches of the Dark Universe.

And the debate continues as to just what Steampunk is.

I asked the members of the State of Black Science Fiction – a group of which I am a proud, founding member – whether Steampunk is Science Fiction or Fantasy and got some interesting answers. I thank all of them for their insight and happily share them with you.

Cm Talley, noted P-Funk scholar and author: “Well, there’s very little science involved, so, it is very definitely fantasy. If there are elements of Wellsian aliens or Vernsian explorations, then you might straddle the ‘science’ line, but for the most part it’s a variation of historical fiction. Steampunk uses a different paradigm: post-feudal, post Age of Reason, New World colonization. Antebellum to height of industrial revolution to Reconstruction, Gilded Age (Victorian Era if you’re British). I call it the ‘alternate history’ branch of fantasy.”

Valjeanne Jeffers,author of the Immortal series of novels and the Steampunk novel, The Switch II: Clockwork: “Steampunk didn’t just come into being – it’s been around for a while. Think Adam Ant; Sherlock Holmes; and the movie, Time After Time (based on H.G. Well’s The Time Machine).

Steampunk is an island of fantasy – of escape – within our technological, very stressful 21th century. Just like every other type of speculative fiction. And a way of making one’s own personal statement.

Someone on a Steampunk blog, described it as ‘poorly defined’. Really? Seriously? How about open to experimentation and imagination. Steampunk is a glorious mixture of other fantasy/SF genres. And the settings and plots reflect this – plots set in the post-civil war; Victorian England; Post-Apocalyptic America; or a futuristic world, as in my Steampunk story: The Switch II: Clockwork .”

Maurice Broaddus, author of The Knights of Breton Court series of novels and the Steampunk story, Pimp My Airship: “Alternate history, which so much of Steampunk is, falls under science fiction.”

Vincent Moore, Senior Media Correspondent at Komplicated.com and author of the Total Recall comic book series: “I agree with Maurice. Where most Steampunk gets going is the argument about what would have happened if the Babbage Difference Engine actually started the Computer Age early. Everything else descends from that argument.”

Cynthia Ward, Market Reporter for the SFWA Bulletin and – with author Nisi Shawl – teaches the workshop Writing the Other: Bridging Cultural Differences for Successful Fiction: “Alternate histories are usually classified as science fiction, but then the Soulless/Umbrella Protectorate series, by Gail Carriger, is urban fantasy with its parallel-Victorian werewolves, vampires, and ghosts. So I’d say the content of the individual Steampunk titles determines whether they’re science fiction or fantasy (or science fantasy).”

Ronald Jones, author of the novels Chronicle of the Liberator and Warriors of the Four Worlds: “I’d say it depends on the author. Steam technology is real world, based upon real science and engineering principles. Add steam tech to a fictional tale, create a fantastical setting, but don’t introduce magical elements, your Steampunk story will be science fiction. If magic is added to your story then I would consider it fantasy.”

Alicia McCalla,  ‎author of the Teen Dystopian novel, Breaking Free: “Balogun Ojetade I think it’s both depending upon the direction the story takes. Alternate History with steam power would be more like Science Fiction but a new or alien world that uses steam technology would be more like Fantasy. Hoping you find a way to explain that. LOL!”

Maybe that is another reason I love Steampunk / Steamfunk. It freely draws from science fiction, fantasy, horror and history, yet is not bound by any of them.