THE BURNING QUESTION:Is there really such a thing as a Black Science Fiction Movie?

THE BURNING QUESTION:Is there really such a thing as a Black Science Fiction Movie?

The film festival will answer that question in a big way, so don’t miss it!

In the meantime, I would like to share my list of the ten most Blacktastic actors in Science Fiction and Fantasy films and television programs. As always, your comments are welcome and encouraged.

Laurence Fishburne as Morpheus in The Matrix trilogy. 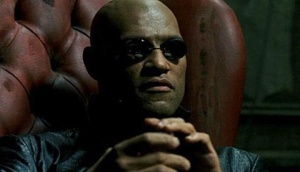 Laurence Fishburne’s portrayal of Morpheus in The Matrix films was absolutely brilliant, bringing to life an iconic master martial artist / father figure who is cooler than Yoda and Mister Miyagi put together.

“I was really attracted to the piece because of the dual reality thing,” Laurence Fishburne said, in regard to the role. “I was fascinated by the idea that there was a real world and then another world that was just inside your head. That was the thing that really drew me towards this. The character was wonderful because he didn’t die. I die a lot in movies. Here it was, I got to play this character that is a major force and I didn’t have to snuff it.”

People talk as if Star Wars made Billy Dee Williams, however, when the original three Star Wars films hit the big screen, Billy Dee Williams was a big name actor and a sex symbol. He actually brought more name recognition to Star Wars. It’s a fact, fanboys; so sit down, relax and have a Colt 45.

Avery Brooks took this role and ran with it, creating the most badass of all “the Captains”.

On playing Ben Sisko, Avery Brooks had this to say: “Certainly the fact you have a black man in a command position is very important. That is something that goes far beyond just having black people working on a show, which itself is also very important. It goes to children being able to see themselves on screen and visualize that in the future they will be doing something of importance to the world at large. It addresses the situation of having all kinds of people interacting and cooperating for the mutual survival of the planet. The writing was exceptional, and the funny thing is I initially said no to Star Trek. My wife convinced me to go to the audition. She was the one who said, ‘You can’t say no to this.’”

Thanks, Mrs. Brooks. I – and millions of other fans – am forever grateful.

Will Smith as Steven Hiller in Independence Day, J in the Men In Black series of films, Del Spooner in I, Robot, Robert Neville in I Am Legend and John Hancock in Hancock.

The undisputed, undefeated heavyweight champion of the science fiction film! He is the reason I could not present this list as a top ten, as he would – in all fairness – hold at least five of those positions. A Blacknificent actor!

Joe Morton as The Brother in The Brother from Another Planet, Miles Dyson in Terminator 2: Judgment Day and Henry Deacon in Eureka.

Joe Morton always gives great performances and while most people recognize him as Miles Dyson in Terminator 2: Judgment Day and as Henry Deacon – the multi-talented super-genius on Eureka, I first became a fan of his work in The Brother From Another Planet, in which he sold the character through facial expressions and body language, as The Brother was “mute”.

Wesley Snipes as Blade in the Blade trilogy and Simon Phoenix in Demolition Man.

Wesley Snipes is one of the greatest action film stars ever!  As Simon Phoenix, he brought an edge and skill to the action of Demolition Man that made what would have been an okay film a good one. Blade, on the other hand, was groundbreaking.

Bullet Time – a special effect / film technique often credited to The Matrix – was actually first seen in Blade. But besides this technological breakthrough, Snipes brought the first serious superhero of African descent to the big screen. Before Blade, our heroes were not characters, they were caricatures. Blank Man and Meteor Man, while interesting, were not embraced as heroes in the Black community. We had enough clowns and buffoons on screen; we had enough “in the hood” movies. We were looking for a hero we could be proud of. Someone we could root for. Blade is that hero. Thanks, Wesley!

Denzel Washington as Eli in The Book of Eli, Doug Carlin in Déjà vu and Ben Marco in The Manchurian Candidate.

Denzel Washington is such a great dramatic actor, that we often forget he has starred in several science fiction films and even starred in an excellent horror film (Fallen).

James Earl Jones as Darth Vader in Star Wars and Thulsa Doom in Conan the Barbarian.

Although I am a fan of several actors, I only consider one to be an idol of mine. That actor is James Earl Jones. For more on why he is one of my idols check out https://chroniclesofharriet.com/2012/02/18/state-of-black-scifi-2012-my-tribute-to-science-fiction-and-fantasy-icon-james-earl-jones/.

Who could possibly forget the haunting voice behind the mask in Star Wars? And James Earl Jones portrayed one of the most menacing – and popular – villains in film – Thulsa Doom.

Often underrated as just a futuristic secretary in a short skirt, we forget how important Nichelle Nichols is to Black fandom, women’s fandom and, indeed, fandom in general.

Nichols’ role as Uhura was unprecedented – a lead character of African descent who was not a servant.

However, feeling that the character was not as fully developed as those of her peers, Nichols planned to leave after the first season to return to Broadway. She reconsidered when a fan of the show approached her at an NAACP function where she was speaking. That fan was Dr. Martin Luther King, Jr.

When she told him of her plans, Dr. King replied, “Stop! You cannot! You cannot leave this show! Do you not understand what you are doing? You are the first non-stereotypical role in television. Nichelle, for the first time, not only our little children and people can look on and see themselves, but people who don’t look like us, from all over the world…for the first time on television, they can see us, as we should be – as intelligent, brilliant, people! People in roles other than slick tap dancers, and maids, which are all wonderful in their own ways, but for the first time we have a woman, a woman, who represents us and not in menial jobs, and you prove it.”

Zoe Saldana as Neytiri in Avatar and Uhura in Star Trek (2009).

To create the aliens in Avatar, the cast acted on a bare stage while wired into performance-capture suits and headgear. We never see Zoe Saldana’s real face, but through her incredible acting, she brought the 10’ tall, blue-skinned Neytiri to life and we related to her.

Avatar represented a great leap forward for film technology and the viewer’s experience and an even greater one for the career of this great actress, who got her first shot at stardom in the movie Drumline.

The actress learned martial arts, archery and horseback riding for her role and was the first of the cast to master the Na’vi “language”. According to director James Cameron, “Zoe was the first one to really have to learn the language. As she owned the language, then everyone else had to match her accent and her pronunciation.”

Saldana admits that the idea of her own face and body never appearing in Avatar did bother her, but only for “about two nanoseconds,” the actress said. “It is a human condition for us to be prone to vanity – especially actors; but I feel this role has been the best role ever to cross my path. When I see Neytiri, I actually see me, in its entirety.”

And now, for your viewing pleasure, here is Wake, a short horror film from up-and-coming director, Bree Newsome. A great work of Black Speculative Fiction. Enjoy!