WERE AMOS & ANDY SCI-FI GEEKS? Spencer Williams and the Son of Ingagi

WERE AMOS & ANDY SCI-FI GEEKS? Spencer Williams and the Son of Ingagi 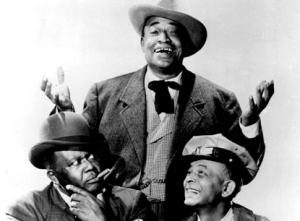 Were Amos and Andy Sci-Fi Geeks?

Well, if not, Spencer Williams – the man who portrayed the dreamer, Andrew “Andy” Hogg Brown – certainly was.

For those of you too young to remember the show, or with parents too young to remember it…or for those who have chosen to forget just what Amos n Andy is, it started as a radio comedy series set in the African-American community of first, Chicago, then Harlem. It was written and voiced by Caucasian comedians, Freeman Gosden and Charles Correll and originated from station WMAQ in Chicago.

After the program was first broadcast in 1928, it grew to become a huge influence on all the radio series that followed it. The show ran as a nightly radio serial from 1928 until 1943, as a weekly situation comedy from 1943 until 1955, and as a nightly disc-jockey program from 1954 until 1960.

Considered by many to be the most offensive television program of all time, Amos n Andy was also one of first TV shows to have a predominantly black cast. Stories mostly centered on the titular characters’ Mystic Knights of the Sea Lodge leader, George “The Kingfish” Stevens and his schemes to get rich, which often included duping his brothers in the Mystic Knights of the Sea Lodge. Andy was particularly dupable. Amos mostly narrated the goings on.

Determined to realize improved images of ourselves in popular culture, the characters in Amos ‘n Andy – including rude, aggressive women and weak black men – were offensive.

Most of the characters – especially, the Kingfish and his wife, Sapphire Stevens – could not engage in a conversation without peppering their speech with faulty grammar and mispronunciations.

The NAACP, bolstered by its 1951 summer convention, mandated an official protest of the program. The organization outlined a list of specific items it felt were objectionable, for example, how “every character is either a clown or a crook,” “Negro doctors are shown as quacks,” and “Negro lawyers are shown as crooks.” As the series aired in June 1951, the NAACP appeared in federal court seeking an injunction against its premiere.

In 1953, CBS reluctantly removed the program from the air.

The Amos ‘n Andy show, however, remained in syndication well into the 1960s and is currently available on DVD.

Before Spencer Williams became known to the nation as Andy Brown of Amos n’ Andy, he wrote, directed and starred in numerous “race” films – a film genre which existed in the United States between about 1915 and 1950, consisting of films produced for an all-black audience and featuring black casts.

As a director, Spencer Williams brought the technique of montage, the superimposing of scenes, to race films and is the writer of the first black science fiction movie, Son of Ingagi (1940).

Alfred N. Sack, whose Dallas, Texas-based company, Sack Amusement Enterprises, produced and distributed race films, was impressed with Williams’ screenplay for Son of Ingagi and offered him the opportunity to write and direct a feature film.

At that time, the only African American filmmaker was the self-financing writer/director/producer Oscar Micheaux.

With his own film projector, Williams began traveling in the southern US, showing his films to audiences. During this time, he met William H. Kier, who was also traveling the same circuit showing films. The two formed a partnership and produced some motion pictures, training films for the Army Air Forces, as well as a film for the Catholic diocese of Tulsa, Oklahoma.

Williams’ resulting film, The Blood of Jesus (1941), was produced by his own company, Amnegro (I swear I did not make that up), on a $5,000 budget using non-professional actors for his cast. The film, a religious fantasy about the struggle for a dying’ Christian woman’s soul, was a major commercial success.

Following the production of Juke Joint, Williams relocated to Tulsa, Oklahoma, where he joined Amos T. Hall in founding the American Business and Industrial College.

In 1948, U.S. radio comedians Freeman Gosden and Charles Correll were planning to take their long-running comedy program Amos ‘n Andy to television. The program focused on the misadventures of a group of African Americans in the Harlem section of New York City. Gosden and Correll were white, but played the black lead characters using racially stereotypical speech patterns. They had previously played the roles in blackface make-up for the 1930 film Check and Double Check, but for the television version they opted to use an African American cast.

Gosden and Correll conducted an extensive national talent search to cast the television version of Amos ‘n Andy. News of the search reached Tulsa, where Williams was sought out by a local radio station that was aware of his previous work in race films.

Williams successfully auditioned for Gosden and Correll, and he was cast as Andrew H. Brown. Williams was joined in the cast by New York theater actor Alvin Childress, who was cast as Amos, and vaudeville comedian Tim Moore, who was cast as their lodge leader, George “Kingfish” Stevens.

After the removal of Amos n Andy from the air, Williams, along with television show cast members Tim Moore, Alvin Childress, and Lillian Randolph and her choir, began a US tour as “The TV Stars of Amos ‘n’ Andy” in 1956. CBS considered this a violation of their exclusivity rights for the show and its characters and the tour was brought to a premature end.

Williams returned to work in stage productions. In 1958, he had a role in the Los Angeles production of Simply Heavenly; the play had a successful New York run. His last credited role was as a hospital orderly in the 1962 Italian horror production L’Orribile Segreto del Dottor Hitchcock.

Williams died of a kidney ailment on December 13, 1969, at the Sawtelle Veterans Administration Hospital in Los Angeles, California. He was survived by his wife, Eula. At the time of his death, news coverage focused solely on his work as a television actor, since few white filmgoers knew of his race films. The New York Times obituary for Williams cited Amos ‘n Andy but made no mention of his work as a film director. A World War I veteran, he is buried at Los Angeles National Cemetery.

Recognition for Williams’ work as a film director came years after his death, when film historians began to rediscover the race films. Some of Williams’ films were considered lost until they were located in a Tyler, Texas, warehouse in 1983. His 1942 feature, Brother Martin: Servant of Jesus, is still considered lost.

Most film historians consider The Blood of Jesus to be Williams’ crowning achievement as a filmmaker. Dave Kehr of The New York Times called the film “magnificent” and Time magazine counted it among its “25 Most Important Films on Race.” In 1991, The Blood of Jesus became the first race film to be added to the U.S. National Film Registry.

Film critic, Armond White, named both The Blood of Jesus and Go Down Death as being “among the most spiritually adventurous movies ever made. They conveyed the moral crisis of the urban/country, blues/spiritual musical dichotomies through their documentary style and fable-like narratives.”

Son of Ingagi is about Eleanor and Bob Lindsay inheriting the house of a doctor Helen Jackson, who had just returned from her trip to Africa with gold and a missing link-type creature named N’Gina.

When N’Gina drinks a potion created by Doctor Jackson, it sends him into a murderous rage and he kills the doctor.

The Lindsay family inherits Dr. Jackson’s house – and, unbeknownst to them – the monstrous, murderous N’Gina along with it.

For what happens next, watch the film. I have embedded it below for your viewing pleasure.

Spencer Williams was a multitalented man whose genius and unwavering determination have earned him a place in the League of Extraordinary Black People!