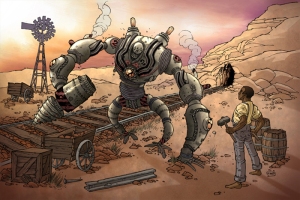 The coming launch of the Steamfunk! anthology in February is causing quite a stir worldwide. With over 100,000 words of Steamy goodness, this anthology is sure to live up to – and exceed – everyone’s expectations.

We were fortunate enough to sit down with one of the contributing authors and one of the Co-Editors of the Steamfunk! anthology recently and discuss the state of the book, other exciting upcoming Steamfunk projects, Steamfunk’s relationship to – and differences from – Steampunk and much more.

Valjeanne’s fiction has appeared in Genesis: An Anthology of Black Science Fiction, Griots: A Sword and Soul Anthology, LuneWing, PurpleMag, Genesis Science Fiction Magazine, Pembroke Magazine, Possibilties, 31 Days of Steamy Mocha, Griots II: Sisters of the Spear (in press), and Steamfunk! (releases February, 2013). She works as an editor for Mocha Memoirs Press and is also co-owner of Q and V Affordable editing.

She blogs regularly at: http://valjeanne.wordpress.com.

Let’s get right to it, Sister Valjeanne. What is Steampunk? What is Steamfunk? Do they differ in any way other than Steamfunk having Black heroes? 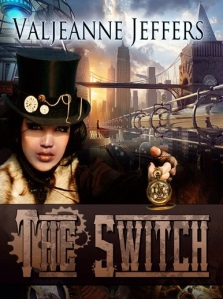 Steampunk is a SF sub-genre that usually features steam-powered machinery and is often set in the 19th century, such as the British Victorian era, American Wild West, or post-apocalyptic future worlds. Think Jules Vern and H.G. Wells, and the flicks Time After Time and Sherlock Holmes. Steamfunk features many of these same settings but it comes out of the Black experience. This may seem like a small divergence, but it entails a great deal more than simply sticking People of Color between the pages. It is Earth shaking… or perhaps I should say Earth building.

Is there a need for a subgenre separate from Steampunk?

Most definitely! Within this new genre we are witnessing the birth of worlds in which Black folks and that which moves us reign supreme. In short, Steamfunk is just as different from Steampunk as Black Science Fiction is from White science fiction. Imagine a Steamfunk hood, an antebellum South in which abolitionists fly airships. Or, as in my novel, Immortal IV: Collision of Worlds, folks living in a post-apocalyptic, steam-world with meta-humans…policed by androids. Now imagine each of these worlds predominated by folks of color: worlds in which Black, Native American, Latino, and Asian folks are not sidekicks but heroines, heroes and villains. That’s what Steamfunk is.

Well said! So, tell us a bit about the Steamfunk anthology. What is it? What was your involvement in it? And when and where can we get it?

The Switch has been very well-received. It just got an outstanding review in The Spelman Messenger, Fall 2012 Issue. I’m thrilled to also be a part in this dynamite anthology! Steamfunk! hasn’t hit the shelves yet, but it will be released [during AnachroCon on February 22, 2013 and] at The Steamfunk Mystery Dinner Party on February 23, 2013 in Atlanta, Georgia. Readers can pick up the first copies of Steamfunk! at this release party.

These are very exciting times for Steamfunk! Have there been any Steamfunk events you have participated in, or that you can tell us about? Are any events coming soon?

As of yet, I haven’t attended any Steamfunk events. But I do plan to attend the Steamfunk Mystery Dinner Party in full-steam attire! I’m also one of the contributing authors of the Alabama Phoenix Festival, a celebration of SF art, films, comics and novels. This event is scheduled for May 2013.

After the highly anticipated release of the Steamfunk anthology, where do you see Steamfunk going in 2013? What other Steamfunk projects do you have in the works?

This is a fresh new genre, and there’s so much speculative ground that can be tapped into! I envision many more SF offerings emerging from this groovy space. I have another novel in the works, Mona Livelong, set in an alternate 1970s steam-world. I plan to drop Mona Livelong later this year, but I’ll be posting sneak peeks right up until its release. In closing, I’d like to thank the extraordinary author Balogun Ojetade for interviewing me. Long live Steamfunk!

DISCUSSING THE STATE OF STEAMFUNK WITH AUTHOR MILTON J. DAVIS!

A regular contributor to Chronicles of Harriet, author Milton J. Davis sat down with us once again and gave us his insight on the present state of Steampunk and Steamfunk and the future of both magnificent movements.

Milton is CEO of MVmedia, producer of the Steamfunk film, Rite of Passage: Initiation and author / publisher of six books of Black Speculative Fiction.

Milton is a chemist by day and a writer / publisher by night and on the weekends. All of his works are self-published through his company, MVmedia, LLC.

Let’s get right into this informative and engaging interview with Milton J. Davis, author, publisher, scientist, historian and educator.

Inquiring minds want to know, Milton…what is Steampunk and just what is Steamfunk? Do they differ in any way other than Steamfunk having Black heroes?

I’m still trying to answer the first question. I look at steampunk from a technical and historical aspect. Technically it’s imaging a past and a future where the major technology is steam based. From a historical standpoint its culture, morals and customs are based on Victorian sensibilities. Steamfunk is dealing with the same era and technology in terms of the experiences of people of color, mainly African and those of the African Diaspora. The way it differs from just having black heroes is that a steamfunk story centers on the experiences of our ancestors who lived during the Victorian Age.

Is there a need for a subgenre separate from Steampunk?

I think so. I believe in order to give free expression to our viewpoint you need a genre that allows it. Knowing who your audience is frees you to tell stories that may not be accepted by others in the broader genre.

Tell us a bit about the Steamfunk anthology. What is it? What was your involvement in it? And when and where can we get it?

The idea for the Steamfunk! anthology sprang from a conversation I was involved in with a number of other writers. We were discussing steampunk and how people of African descent were under-represented.  Many of the writers were interested in doing steampunk stories based on our culture and traditions so I said, let’s do an anthology. Balogun Ojetade agreed to join me as co-editor so here we are. Steamfunk! will make its debut February 22, 2013 at AnachroCon. It will be available afterwards on my website, as well as on Amazon, Barnes and Noble and other online book sources.

Have there been any Steamfunk events you have participated in, or that you can tell us about? Are any events coming soon?

After the highly anticipated release of the Steamfunk anthology, where do you see Steamfunk going in 2013? What other Steamfunk projects do you have in the works?

I hope to see it expand. Hopefully other writers and readers will see the possibilities and share their own interpretations. As for me, I have a couple of novel projects planned that are set in my alternate history steampunk country of Freedonia: From Here to Timbuktu, an action adventure novel and Unrequited, an action romance series. After that, who knows?

We thank you, Milton Davis, for another great interview and we look forward to all of those great works of Steamfunk on the horizon!