This is an exciting week for me. The greatest cosmological event of all time, in my humble opinion – my bEARTHday – is February 21. You are all invited to join me in celebration. In honor of that august day (can it be august in February?), complimentary drinks are on me!

Immediately following the celebration of my 25th solar return – that’s right, I said 25th (I am a Fantasy writer, after all) – is the long-awaited release of the Steamfunk anthology!

We will debut Steamfunk at AnachroCon on February 22, 2013. For those who don’t know, AnachroCon is, by their own definition, “the premier place in the Southern United States for people to celebrate Historical Reenacting, Alternate History, Steampunk, Sciences, Horror, Etiquette & Indulgence, Fashion, Fabrication, Literature & Media, Costuming and socialize with people of like minds.” Sounds like fun…and this year, AnachroCon gets fun-ky, as thousands of Steamfunkateers converge upon the convention to witness the unveiling of an anthology chock-full-o’ steamy and funky goodness!

To help us celebrate, the good folks at AnachroCon have given Steamfunk Co-Editor, Milton Davis, a table, where contributing authors to Steamfunk will sign books and hand out free hugs and handshakes. They have also made me a Guest and I will have the pleasure of speaking on a panel or two.

So, come on by and let’s funk up AnachroCon!

Following is a list of Funkateers and their Funktastic contributions to the Steamfunk Anthology:

Hannibal Tabu – The Sharp Knife of a Short Life

Geoffrey Thorne – The Tunnel at the End of Light

Ray Dean – A Will of Steel

Rebecca McFarland Kyle – Once a Spider 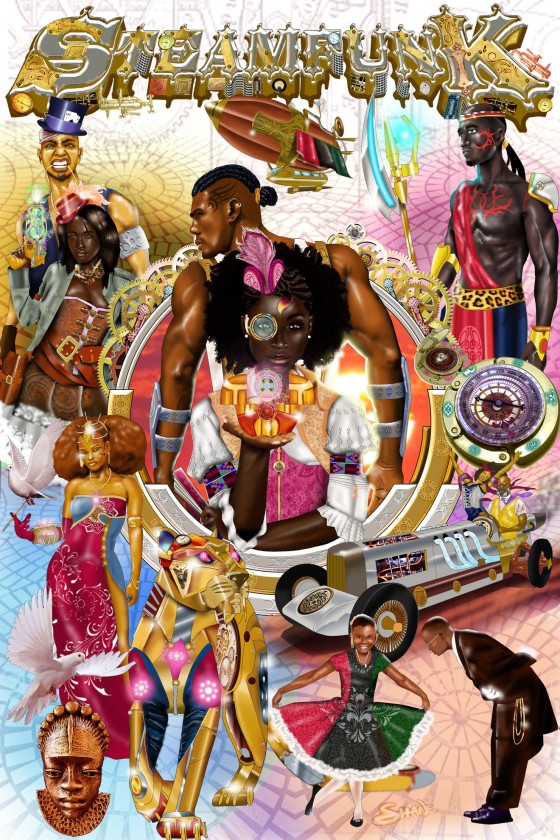