French, Portuguese English and Spanish colonialists held costumed balls. Individuals wore costumes and the merry-making was largely indoors, though spill-over onto the streets could be expected. It is the same today with the European Carnivals of Quebec, Venice and elsewhere and is also present also in the celebration of Halloween.

By contrast, the African style of celebration called for costumed bands, and for the merry-making focus to be outdoors, rather than indoors, similar to what we see with today’s Caribbean and American Carnivals.

One of the clearest examples of the masquerade in Africa is the Yoruba Egungun Festival. During this festival, every family honors its collective ancestors, and all the members of an extended family lineage wear the same colors, thus constituting a “band”.

From the Egungun celebration also comes a feature that we find prominent in various Caribbean carnivals: throwing talcum powder on fellow masqueraders, from which comes the Trinidadian expression – “you can’t play mas’ and ‘fraid powder!”.

During the Egungun festival people wear masks to show outwardly that they are no longer themselves, that their body has been possessed by an ancestral spirit.

The ancestral spirits of the Yoruba are much more than just dead relatives, they play an active role in the daily life of the living. Believed to provide protection and guidance, there are numerous ways the ancestors communicate with the living, one of the most unique is their manifestation on earth in the form of masked spirits known as Egungun.

Nowadays, two major, annual Masquerades, which display and extol the beauty of Black Speculative Art and Fiction, bring together elements from the grand masked celebrations around the globe to bring you the best in Black cosplay.

The Afrofuturist Affair – brainchild of the brilliant attorney, activist, author and founder of the mega-popular Afrofuturist Affair Tumblr Blog, Rasheedah Phillips – is a space where different modes of time (past, present, and future and any and all combinations therein and thereout) are bought forward or backward into the present through the preservation of energy in artifacts and through the persistence of memory in flesh and through blood.

The Afrofuturist Affair, also known as The Museum of Time is, as Rasheedah puts it, “Every-when and No-when simultaneously, enacting all possible times in all possible permutations.” While most museums are limited to the here/now/then/there, in The Museum of Time, there are interactions with varied modes/forms/theories/visions of time through music, art, story, fashion, and exchange of thoughts and ideas.

Once you step inside the Museum of Time, you become Master Traveler, Manipulator, Alchemist and Magician, crafting time and displacing it however you see fit. The singular requirement is that you share your visions with the other Masters in the room.

The other major masquerade is The Mahogany Masquerade: A Night of Steamfunk and Film, in which the many enthusiastic and creative participants come, dressed in their best Steamfunk, Dieselfunk and Rococoa costumes for an unforgettable night of cosplay, short films, engaging chats with other Steamfunkateers and, of course, partying into the wee hours of the night.

The origin of the Mahogany Masquerade began when Yours Truly began research on Black perceptions of self and our place in Cosplay.

What I found intrigued me:

When asked in a recent study to describe their version of the “ideal” woman, black and white teens conjured up vastly different images.

The white teen ideal was a Barbie-like woman, 5’7”, between 100 and 110 pounds, with blue eyes and long flowing hair.

The black teens’ ideal American woman had nothing to do with physical characteristics. According to Sheila Parker, Ph.D., “They told us that the ideal Black woman has a personal sense of style, who ‘knows where she’s going’, has a nice personality, gets along well with other people, and has a good head on her shoulders.” Only if pushed did they name physical characteristics – fuller hips, ‘thick’ thighs, a ‘curvy butt’ and a small waist.

Cultural expectations, idealizations, and fixations mold the accepted definitions of beauty and the perceived ideal body-shape.

I have often contemplated – with such a healthy perception of body image – why so few of us cosplay, especially girls and women of African descent. Is it because we are not into science fiction or fantasy?

Nope. We are into speculative fiction, and in large numbers at that.

I have come to realize that one reason sisters shy away is the disdain for the fuller-figure that permeates fandom. Heavier people often feel too self-conscious to cosplay. Not only are there virtually no characters from anime, manga, film, science fiction, or fantasy who are already portrayed as fuller-figured, but fans can be very cruel to full-figured cosplayers who dare to cosplay “conventionally attractive” characters.

I recently posted a photo of Black people cosplaying as DC superheroes. People loved the photo, however, I was disturbed that a few complained about the brother portraying Batman ruining the shot because of his pot-belly (and no, that was not me behind the caped crusaders mask, before you ask).

I have heard people laugh at the plus-sized Batgirls and Storms, or make rude comments about the fat stout fellow portraying a Spartan from 300.

On one forum, a full-figured girl asked who she could cosplay as at an upcoming convention; the only person who even bothered to respond said, “Princess Fiona, Shrek’s ogre wife.”

On another forum, a curvaceous Black woman asked for suggestions for her television cosplay. Her answers? Sandra Clark – Jackee Harry’s character from the sitcom, 227 – or Mercedes Jones – the girl portrayed by actress Amber Riley on Glee. She was thinking she looked more like Lana Kane, the character from the animated series, Archer.

In an essay by journalist Kendra James called Race + Fandom: When Defaulting to White Isn’t an Option, James writes about facing ignorance when Black women cosplay. “when a non-white cosplayer colors outside the lines, there’s a risk of getting an awkward look because, instead of seeing the costume, no matter how perfect it might be, others see the color of your skin and you can see the confusion in their eyes: ‘Why is a black girl dressed as Zatanna?’ Worse are the ones who aren’t confused, but then think they’re being inoffensively clever. ‘You know there probably weren’t many Black USO Girls in the 1940s, right?’ Or, my personal favorite, ‘Wonder Woman? I thought you would’ve done Nubia.’ It’s an extension of the “default to white” privilege many fans still engage in on a regular basis.”

Ms. James goes on further to say “It often feels like a white cosplayer can not only dress as their favorite characters of color but also do so in the most offensive way without comment.”

Yes, people are still this ignorant.

We creatives must continue to fight such ignorance with education and inspiration.

I brought the idea to my close friend, Milton Davis, who shares my opinion that we are the ones who must work to improve our own images in film, fiction and other fandom and we went to work on creating what is now the premier Black masquerade in the Southeast.

Last year in October, we came out in force – in all our myriad beauty – and brought the funk to The Mahogany Masquerade: A Night of Steamfunk and Film! 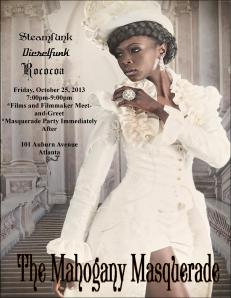 This year, we are doing it even bigger, with a Masquerade Party after the film screenings that is sure to be raved about for decades to follow!

Well, talked about for a few days afterward, at least.

Immediately after, we will take the party to the streets and parade over a couple of blocks for the Masquerade Party at the BQE Restaurant and Lounge at 262 Edgewood Avenue.

Wear your Steamfunk, Dieselfunk, or Rococoa clothing, costumes, gadgets and gear and get funky with us!

And if you know of any other African or African-American themed masquerade balls, please let us know.