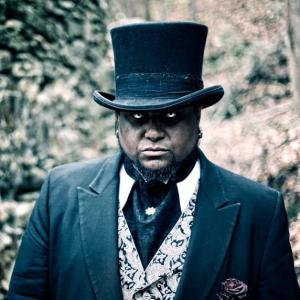 Well, that is sort of paraphrasing a description of Rite of Passage, the Steamfunk feature film, by Professor Lisa Yaszek, Director of Undergraduate Studies. School of Literature, Media and Communication and one of the Associate Producers of the film. Her actual description: “When people ask what Rite of Passage is about, I tell them to think Buffy the Vampire Slayer, set in Victorian times, with Black superheroes.”

Jadon Ben Israel, filmmaker and veteran actor of such films as Fast Five and Champion Road: Arena – who plays Vampire-Lord and martial arts master, Joe in Rite of Passage – describes the film as a “Black Steampunk Avengers.”

Author, Publisher and Executive Producer of “Rite of Passage” in his Steamfunk persona, Zeke.

Milton Davis, author, publisher, Executive Producer of Rite of Passage and writer of the original story upon which the film is based, describes the film as “A Steamfunk movie collaboration destined to change the perception of historical fantasy. It’s the tale of the city of Nicodemus, Kansas and the special souls that have gathered to protect it. Rite of Passage blends history, fantasy and Steamfunk into an exciting action movie that gives a glimpse of the adventure yet to come.”

And, of course, accurate.

In the Rite of Passage universe, the Orisa (oh-REE-sha) – forces of nature that serve and guide humans and animals alike – have given several powerful artifacts to Oluwo (“Master Teachers; possessors of secret powers”), who are to keep those artifacts until their rightful possessors – known as Guardians – come along. The Oluwo are to help their Guardian transform, so that they are worthy to possess the artifact.

In the film, the Guardians are Dorothy Wright, Black Dispatch, Conductor on the Underground Railroad and pupil of Harriet Tubman; famed lawman, Bass Reeves; and John Henry, the legendary “steel drivin’ man.” 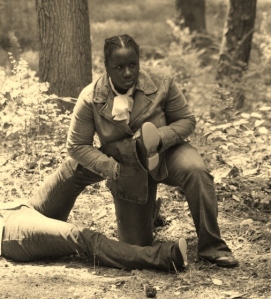 Harriet Tubman – who is an artifact, given to the world to protect it – gathers the Guardians around the globe to prepare them for the coming of a powerful entity she calls Jedidiah Green, an ancient and dark being who feeds on the power of the artifacts and is drawn to their possessors.

We also learn a bit about the other Guardians, such as the brutal – and somewhat insane – Dentist of Westminster and Sherlock Holmes.

Jedidiah Green also has his team of “supervillains”, if you will: the Piper, the Blood-Kin (vampires) and the Night-Kin (zombies, ghouls, ghasts, Night Howlers and other undead).

African American rodeo owner, Nat (pronounced “Nate”) Love flees to Nicodemus, Kansas – the small town destined to be the final battlefield in the war against Jedidiah Green and home to the Guardians – after his business rival, P.T. Barnum, tries to have him murdered. 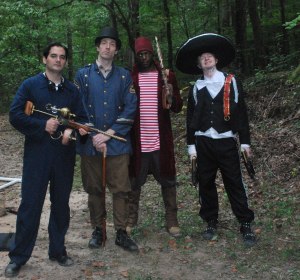 Four of the five assassins sent to destroy the town of Nicodemus.

Barnum dispatches a special team of assassins to Nicodemus to retrieve Nat Love by any means and to kill the Guardians if necessary.

And thus begins the film.

We have been in production since August 18, following the production of the tie-in, Rite of Passage: The Dentist of Westminster.

Production is going very well, although filming on a budget of fumes has proved very challenging and we had to forgo shooting once because we just did not have the money to purchase the costumes for that scene. This of course, is our biggest obstacle, so please donate and help us out. Steampunks, we would definitely appreciate any donations of old costumes and or props…oh, and we have great perks, too!

The actors are phenomenal, really bringing their characters to life. 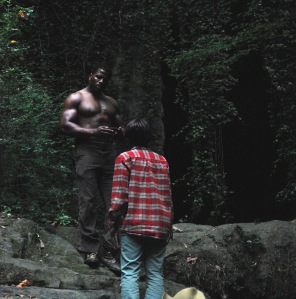 John Henry receives instructions from his teacher, the fearsome Lana.

Recently, actor Maurice Johnson, who portrays – no, who is – John Henry, received a call from E. Roger Mitchell, who has had starring roles in Flight, alongside Denzel Washington, Battle Los Angeles, S.W.A.T. and The Crazies – and who portrayed John Henry in the short masterpiece, John Henry and the Railroad. Mitchell told Maurice that he has been following what is going on with Rite of Passage and told him “Now, you are the real John Henry!”

The crew is amazing and makes my job easy. Director of Photography, John Thornton, who is also Professor of Film Production at GA-Tech, brings his experience as a Director and Cinematographer for several independent and Disney films to Rite of Passage. Imed “Kunle” Patman, Cinematographer, brings his experience and artistic genius to the film, as does Assistant Director and Editor, Brandon Davis.

“We have really been blessed to have such talented and intelligent people working with us,” Akin Danny Donaldson, Producer of Rite of Passage, said. “We are making history as we make a film about our history.”