In early June of 2013, author Milton Davis and I had a discussion – as we often do – about the importance of Black people reading, writing and watching Science Fiction and Fantasy and the Black authors, artists and filmmakers currently creating in these genres.

The conversation shifted to the various fan conventions we attend and the fact that the fastest growing demographic at these conventions is Black people. We became optimistic about this year’s Alien Encounters celebration and the audience that it is sure to draw. We also talked about how Alien Encounters is going national, with celebrations in the DC / Maryland / Virginia area, Philadelphia and even as far as California. 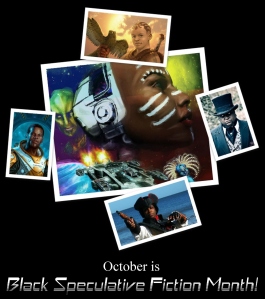 On June 26, 2013, Milton Davis and I met with the Program Coordinator at the Auburn Avenue Research Library to plan the program for this year’s Alien Encounters when the concept of Black Speculative Fiction Month came up again. Milton discussed that meeting with famed writer and film producer, Reginald Hudlin and others the next day:

“So yesterday Balogun Ojetade, Morris Gardner (program coordinator for the Auburn Avenue Research Library) and myself were discussing the upcoming Alien Encounters program in October. We talked about a similar event being organized in the DC area the same month, and another event that will take place in Philly. At that point I brought up an idea Balogun and I were contemplating: let’s designate October Black Speculative Fiction month! Morris loved the idea. ‘Let’s claim it!’ he replied.

So there you have it. We hope you’ll join us.”

In celebration of this august – well, October – occasion, Milton Davis has launched the Black Speculative Fiction Month website, which features events, in celebration of the holiday, that are happening worldwide throughout the month.

My Black Speculative Fiction Month gift to you – well, one of them, because there is much more to come – is a short list of Blacktacular books of speculative fiction, by – and about – Black people.

Imaro by Charles Saunders – A masterwork from the father of Sword and Soul. Imaro is the definition of great Heroic Fantasy.

The Parable of the Sower by Octavia E. Butler – Widely considered Butler’s best work, this is an incredible story of a dystopian future and a heroine with hyper-empathy.

Immortal by Valjeanne Jeffers – The first in a series of exciting books that takes place in the world of Tundra. Jeffers deftly combines Science Fiction, Horror and Romance in telling the story of Karla, a shapeshifter who fights the forces of evil of which she dreams.

A Darker Shade of Midnight by Lynn Emery – Mystery, Horror and Romance combine to give you this masterpiece that is a first in an incredible series. LaShaun Rousselle – the protagonist, who uses her paranormal abilities to solve the mystery of who killed her cousin and what lives in the woods on her family’s land – is one of the most interesting heroine’s in fiction.

Order of the Seers by Cerece Rennie Murphy – This thrilling tale of discrimination, love, retribution, lust for power and the great potential that lies dormant in us all follows the life and struggle of Liam and Lilith Knight – a brother and sister duo who are hunted by a ruthless and corrupt branch of the U.N., which seeks to capture and exploit Lilith’s unique ability to envision the future.

Hayward’s Reach by Thaddeus Howze – a series of short stories told by Mokoto, the last survivor of an unexpected cataclysm. Mokoto, even in his current state of in-humanity, learns what it means to be truly human.

Steamfunk edited by Milton Davis and Balogun Ojetade – This is the definitive work of Steamfunk – a philosophy or style of writing that combines Black culture and approach to life with that of the steampunk philosophy and / or  steampunk fiction – featuring fifteen masterfully crafted stories by fifteen amazing authors.

Woman of the Woods by Milton Davis – A powerful Sword and Soul tale, set in Davis’ intriguing Uhuru universe, first experienced in his seminal series, Meji. Woman of the Woods draws us into the world of demon-hunter, Sadatina and her “sisters”, a duo of twin lionesses who aid her in her battle against the vicious Mosele and their demon allies, who seek to destroy her people.

Redeemer by Balogun Ojetade – This is an edge-of-your-seat adventure that is both gangster saga and science fiction epic. A tale of fatherhood and of predestination versus predetermination. An entertaining mash-up that Science Fiction, Urban Fantasy and Urban Fiction fans alike will enjoy.

The Keys by Balogun Ojetade – YOU choose to be one of the two heroes of the story: Jordan Drummond, college basketball phenomenon and math genius; or Theresa “Terry” De Fuego, self-proclaimed “extreme journalist.” YOU battle the forces of evil and maybe even save the world! YOU decide your destiny… for YOU are the Hero!

Finally, if you would like to meet others interested in Black science fiction, fantasy and horror, join us at Alien Encounters IV and on the State Of Black Science Fiction Facebook group.