THE KEYS: YOU are the hero!

In 1978, an unproven assistant editor in her early twenties, Joëlle Delbourgo got an unwelcome message: her boss at Bantam wanted to see her.

Delbourgo was championing a new children’s title called The Cave of Time. The book was something of an anomaly – it didn’t have a plot or a main character or even a proper ending. Instead, the reader was asked to assume the role of the hero. And The Cave of Time wasn’t the only book of its kind – it was one book in a series!

The main premise of the books was simple: they weren’t meant to be read straight through; instead, each book consisted of a collection of episodes which were read in a certain order depending on the choices the reader made. The reader, as the hero, found himself or herself in a situation faced with a choice of actions; having decided what action to take, he or she proceeded to the page of the book where the consequences of that decision were played out and a new decision then had to be made. Depending on the reader’s decisions, the protagonist succeeded or failed; lived or died.

Delbourgo hoped to make it her first major acquisition.

The main premise of the books was simple: they weren’t meant to be read straight through; instead, each book consisted of a collection of episodes which were read in a certain order depending on the choices the reader made. The reader, as protagonist, finds himself or herself in a situation and is faced with a choice of actions; having decided what action to take, he or she proceeds to the page of the book where the consequences of that decision are played out and a new decision must be made. Though the reader usually must decide between only two actions, sometimes three or more actions present themselves, with the maximum being five or six. Depending on the reader’s decisions, the protagonist succeeds or fails, lives or dies.

In fact, she hoped to pursue the entire series. However, as a junior voice in the company, she had no idea how her higher-ups would respond to such an experimental project. As she stepped into the office of Oscar Dystel, Bantam’s president, anxiety struck.

“I understand you’re trying to change the way kids read,” he barked.

She was. And she wasn’t alone.

A decade earlier, an attorney named Edward Packard hit upon an idea that grew from his nights reading bedtime stories to his children. Whenever Packard couldn’t figure out how to resolve a story, he asked his children to give him options on how the story should end. He soon realized that they enjoyed the stories more when they helped choose the endings.

This interactivity was a valuable storytelling device – it held the children’s attention and sparked their innate creativity.

Packard figured if his children enjoyed this form of storytelling, other children would too and he began to contemplate a way to package it in book form. During his commute to and from work, he began to write a shipwreck adventure called Sugarcane Island, which had multiple storylines that required reader participation.

In 1969, he passed his finished copy of Sugarcane Island along to a friend of a friend who worked as a William Morris literary agent. The feedback was glowing.

“The agent said he would be surprised if there were no takers,” Packard recalls. “Then he proceeded to be surprised.”

Sugarcane Island collected dust until 1975, when Vermont Crossroads Press, a publisher looking for innovative children’s books, picked it up. The press was headed by R.A. Montgomery, a former high school teacher who saw the educational value in game structure.  According to Montgomery,“Experiential learning is the most powerful way for kids, or for anyone, to learn something,”

Montgomery published Sugarcane Island to a meager response, but he wasn’t discouraged by the small numbers. He and Packard began to write more stories. However, Montgomery’s Vermont Crossroads Press didn’t have great distribution capability, so he passed the title to a young literary agent named Amy Berkower, who tried to pitch the books to numerous houses.

The only person responsive was Joëlle Delbourgo.

“I got really excited,” says Delbourgo, who also worked in Bantam’s educational division. “I said, ‘Amy, this is revolutionary.’ This is precomputer, remember. The idea of interactive fiction, choosing an ending, was fresh and novel. It tapped into something very fundamental.”

But before Delbourgo could publish the book, she had to persuade her boss at Bantam to take a risk…and corporations are not in the risk-taking business.

Dystel was skeptical at first, but Delbourgo’s presentation was convincing. She believed in the product. Dystel wound up becoming Delbourgo’s biggest supporter and the Choose Your Own Adventure series officially launched in 1979.

Montgomery and Packard were each contracted to write six books. The first title to be picked up by Bantam was Montgomery’s Journey Under the Sea, about an expedition to Atlantis. Readers were confronted with seismic choices: If you put up the energy repulsion shields to try and escape the black hole, turn to page 22!

To stoke attention, Bantam gave away thousands of copies, flooded book fairs, and created teaching guides for classrooms. The strategy worked. By 1981, Bantam had four million copies in print.

That same year, the young daughter of New York Times culture columnist Aljean Harmetz picked up a CYOA book and couldn’t put it down. Intrigued, Harmetz wrote a piece that described the series as being “as contagious as chicken pox.” That’s when the popularity of the books exploded.

To capitalize on the momentum, Bantam decided to roll out one title a month. In turning up the frequency to serial levels, the publisher hit upon another novelty that would prove irresistible. Because the books were numbered sequentially, kids started collecting them like trading cards. Years later, this savvy marketing technique would be applied to other series, including The Baby-Sitters Club and my son’s favorite series: Diary of a Wimpy Kid.

By the late 1980s, the series was showing signs of exhaustion. Crappy concepts like You Are a Shark signaled the end was near. Then came the rise of video and computer games, which provided that same interactivity in an even more addictive format so, in 1999 the publisher of the 250 million copy selling powerhouse, Choose Your Own Adventure chose to retire the brand and let the trademark lapse.

However, CYOA had – and continues to have – a powerful influence worldwide, inspiring such mega-popular books as Goosebumps, and proving to skeptical parents that children were still willing to open a book and read.

I believe the solution to getting reluctant readers to read lies in the CYOA, or gamebook, format.

Back in the late 70s through the late 90s, children around the world – particularly boys, who are often reluctant readers – and Black boys, long considered the most reluctant readers – were reading, collecting, trading and discussing the Choose Your Own Adventure books. 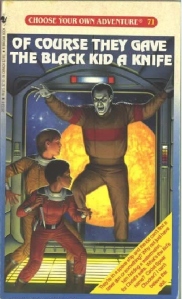 This was especially important for Black children who never saw themselves as the hero in books. But in the CYOA books, invariably written in the 2nd Person, the reader becomes “you.” YOU fight the bandits; YOU travel by hot air balloon across the Sahara Desert to rescue your friends. Finally, we Black boys could be the hero…even though the illustrations always showed the hero as some white boy. But we’d just ignore the photos and enjoy being the hero for once. Sad, but true.

Choose Your Own Adventure has been cited by numerous educators as a uniquely effective method for helping students learn to read.  The series has documented popular appeal for the reluctant reader due to its interactivity.  Choose Your Own Adventure has also been used specifically in technology lesson plans in elementary, high school and college curricula, as well as in professional development tools.

The role-playing game-style CYOA books, which use stats and sometimes even dice, similar to Dungeons and Dragons, seem to be aimed at high school-aged readers and older, most Choose Your Own Adventure-type books seem to be aimed at children between the ages of 10 and 13, though there has been a series for adults and there is presently a series for preschoolers. 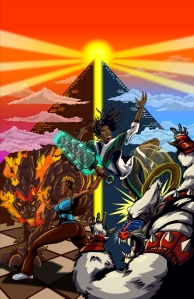 In my YOU are the Hero series of books, beginning with the Young Adult novel (for ages 13 and older), The Keys, the reader can choose to be either Teresa “Terry” De Fuego, a nineteen year old self-proclaimed extreme journalist of Aztec descent, or Jordan Drummond, nineteen year old math genius and star basketball player of Igbo and Ateke descent.

Whichever of these two strong, independent and cool characters the reader chooses to be, they are encouraged throughout the book to be self-confident enough to forge ahead and complete the adventure, while applying common sense, prudence, and certain moral values in the decision-making process.

Courage is of great importance in The Keys and in all of the YOU are the Hero books, for unless the hero forges ahead, there is no story.

Reading The Keys also helps to instill confidence in yourself and teaches young readers to trust themselves to do the right thing.

However, courage and confidence should not rule out caution. The successful hero is prudent – thinking before acting and being patient enough to learn all that may be useful later, asking for expert help when he or she needs it, using common sense, and taking the advice of our elders, who are wiser than us.

So, finally, our youth – and we adults, too – can be the hero in Science Fiction, Fantasy and Horror stories and we can control how the story unfolds and even how it ends.

Check out The Keys! The amazing cover (seen at the top of this post) and the 20 Blacktastic interior illustrations by artist, Chris Miller!