Four Choose Your Adventure Books YOU Should Read!

In March 1983, an unconventional series of books held the top three entries of the Sunday Times bestseller list. These were Fighting Fantasy books – gamebooks similar to The Keys, the first book in my YOU are the Hero series, but different in that to take part in the fun of Fighting Fantasy, you also needed a pencil, eraser and dice.

The next book in the YOU are the Hero series, The Haunting of Truth High, will incorporate traditional Afrikan game elements.

According to one parent, who bought The Keys for her 15 year old son and 12 year old daughter, she was surprised that her teens, long classified as “reluctant readers,” became so engrossed in the adventures of Terry De Fuego and Jordan Drummond. “My children became completely taken over by the roleplaying as, suddenly, this was the chance to experience a book where, not only did the heroes look like them, but they were the hero.”

She went on further to say “The fact that they could also choose a hero from both genders excited them and pleasantly surprised me.”

In honor of those books that continue to inspire others to read and to write, I would like to share with you some of my favorite Choose Your Own Adventure titles that I am sure you enjoyed reading as well.

For those who never read Choose Your Own Adventure Books, you are in for a treat! Be sure to read The Keys first, then read the books that follow*! 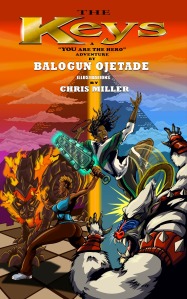 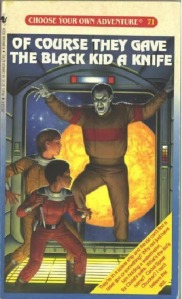 *These are parodies of CYOA books, shared for your amusement. However, The Keys is real, of course!