Greetings, all! This is an interview from December 22, 2015. One of the founders of the Airship Ashanti, Ofeibea Loveless, is the interviewer. 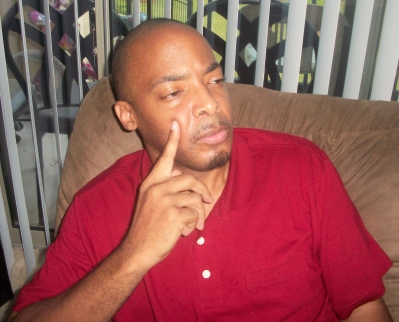 Loveless: How do you define Rococoa?
Ojetade: I define Rococoa as the bridge between Sword and Soul (African-inspired epic and heroic fantasy) and Steamfunk (steampunk expressed through black/African craft and consciousness). Think Three Finger’d Jack, the pirate Black Caesar; the Black Count, Thomas Dumas, Nat Turner, the Haitian Revolution, the Stono Rebellion. Add elements of the supernatural and/or retrofuturistic technology powered by springs and gears…that is Rococoa!

Loveless: How did you come up with this concept?
Ojetade: I had long been curious about the era that sits between sword and soul, normally set in the 15th century or earlier and steamfunk, which normally is set during the Victorian era, between 1837 and 1901. I asked my author friends if anyone had a name for that time because it is a time that fascinates me – the Haitian Revolution, pirates and swashbucklers, a time of reverence for art and technology, but a time that still valued skill with a sword and connection to nature. I began a quest of discovery, fueled by a determination to find a name for this era. After a brief bit of research, I stumbled upon rococo…and, to my surprise, rococopunk.

Before I could come up with a name myself, the brilliant Briaan L. Barron, artist and owner of Bri-Dimensional Images, did it for me with her release of the animated documentary, Steamfunk and Rococoa: A Black Victorian Fantasy. While there is not much talk of rococo or rococopunk in the documentary the spelling was perfect! As far as the Rococoa anthology goes, fourteen masters of speculative fiction have taken this hot, new genre, embraced its established themes and refashioned them in surprising ways and settings. The result is an anthology that defies its genre even as it defines it.

Loveless: With more people of color participating in steampunk/dieselpunk circles, do you feel things have gotten better for POC in these communities since you started?
Ojetade: Not really. I think it will have gotten better when we have several of our own airships like you have created. When people stop regarding steamfunk as a gimmick and understand it is a viable and growing subgenre of steampunk. One that tells the stories that previously went untold. Things are only better when you have control. When you have your own sandbox and only play in the sandbox of others if you choose to, not because you have to.

Loveless: Your Harriet Tubman series is amazing! (Ojetade wrote MOSES: The Chronicles of Harriet Tubman (Books 1 & 2) and The Chronicles of Harriet Tubman: Freedonia) Why did you want to bring her to the forefront with those stories?
Ojetade: Harriet Tubman has been one of my idols since I was four or five years old. In fact, she is my third idol, after my mother and my father. She is the epitome of a freedom fighter and a warrior and she was brilliant. All qualities I admire. Growing up, I would sit and watch The Wild, Wild West with my mother – it is one of her favorite television shows – and I said that the first novel I ever wrote would be set in a retrofuturistic, Western world like that in The Wild, Wild West, but instead of Jim West, my hero would be my idol, Harriet Tubman.

Loveless: How does telling these Steamfunk, Dieselfunk, Cyberfunk, Rococoa stories benefit those communities as a whole?
Ojetade: First and foremost, we have control. Telling your own stories is very important. An Ewe proverb says, “Gnatola ma no kpon sia, eyenabe adelan to kpo mi sena.” Until the lion has his or her own storyteller, the hunter will always have the best part of the story. It is not the responsibility of anyone else to tell your story the way it needs to be told. It is not anyone else’s responsibility to tell tales of us being the hero, of us building great empires, of us creating technology and possessing knowledge that still confounds the scholars of the world. It is our responsibility to do that.

Studies have shown that, in the general population, science fiction and fantasy has an impact on the teaching of values and critical literacy to young adults. Science fiction challenges readers to first imagine and then to realize the future of not only the novel they are reading but, also the future of the world in which they live.

Young adults of African descent can – and do – relate to the experiences in science fiction and fantasy. Indeed, they crave these experiences and read speculative fiction just as voraciously as young adults of other races. But the lack of self-images in this literature can have a negative effect on the psyche of young readers and can, indeed, contribute to negative behavior. We derive our perceptions of self by what we hear, see, and read and our perception directly affects our actions. Through fantasy and science fiction written with black characters as the heroes, our youth begin to perceive themselves as heroic, as hard working, as good, and they will begin to act in accord with how they perceive themselves.

So, besides enjoying what I write, writing Steamfunk, Rococoa, Dieselfunk and Cyberfunk stories fill a much-needed void and introduces us to something new and cool.

Loveless: Tell us about SOBSFic Con.
Ojetade: SOBSFic Con, or the State of Black Science Fiction Convention, is the premier convention for people of African descent throughout the diaspora to celebrate science fiction, fantasy and horror cosplay, literature and media, and to socialize with people of like minds. The convention will take place Saturday, June 11, through Sunday, June 12, 2016, in Atlanta at the Southwest Arts Center.

We are much more than a science fiction or comic book convention. We are dedicated to the principle of providing a safe social environment for the free exchange of ideas. And we are gathering to interact, share and explore the possibilities of all things historical, alternately historical and fictional created by, for and about people of African descent.

Loveless: Along with Milton Davis, you are recognized as a leading author/creator of Steamfunk/Dieselfunk. Does “representing” ever get boring?
Ojetade: Never! Doing what you love doesn’t get boring unless you are boring. I represent Steamfunk and Dieselfunk through my work, which I love and through pushing the work of others, which I also love. It’s a win-win for me.

Loveless: What do you have coming up next?
Ojetade: I am working with Milton Davis to roll out the Ki Khanga Sword and Soul role-playing game at SOBSFic Con and I will edit/publish Black Power: The Superhero Anthology, which releases in December 2016. Besides that, all of my efforts are going into marketing the Roaring Lions Productions brand and building up the momentum and hype leading up to SOBSFic Con through con appearances, book signings and other events every month.

Loveless: Is there anything else you’d like to share with readers?
Ojetade: I’d like to share what I share at every convention and speaking engagement I attend: Research, research, RESEARCH! Research allows you to appreciate, not appropriate; research lets you know that you probably aren’t the first person to have a cool idea. Research is giving a damn, so do it!

Ofeibea Loveless, co-founder of the Midwest Black Speculative Fiction Alliance, is a writer/editor who focuses on multicultural aspects of steampunk.

Rococoa is currently available for purchase on amazon.com. You can read more of Ojetade’s musings at chroniclesofharriet.com.