“I can honestly say that I’ve been waiting for this book for years…This book imagines Harriet Tubman as a superhero of sorts, in a world where she and other “Gifted” fight for good or evil. What starts out as a simple kidnapping case evolves into a sinister threat against the country–and that’s as far as I can go without any spoilers! Something like 90% of steampunk fiction takes place in Victorian era England, but moving the action to post-Civil War America makes the story fresh for that reason alone. In keeping with our country’s rebellious spirit, every character has a strong personality that leaps off the page. There’s a lot of rough and tumble action with fight scenes ripped out of a kung-fu movie. The pulp fiction sensibility keeps you turning pages and screams for a film adaptation (after “Django Unchained”, I’m looking at you, Quentin Tarantino!) Best of all? I never could have predicted all of the twists and turns in the plot...I plan to explore more of Mr. Ojetade’s work and recommend that you do as well.”

“Enjoyed the mixture of history, fantasy and steamfunk. Looking forward to more adventures.”

“I loved these two books for the speed of the storytelling and the overall tension they built as they ‘steamed’ along. Who would have thought to have the legendary Harriet Tubman, known for her work on the ‘Underground Railroad’, become a super heroine?”

“These books were fantastic, never once letting my mind wander. My hat off to the author, Balogun Ojetade for a great couple of books. I’ll be back in his corner for more!”

“Balogun combines so many genres into this novel that it makes your head spin, but like a good gumbo it’s all about the roux.”

“I can tell he did homework about Post Civil War 1800’s. Nor did he forsake plot for zany action. He took on important historical characters and breathes new life into them. This is alternative historical fiction at its best. Throughout the novel, you will encounter many people that will have you running to Google to discover their history. You will also encounter tall tale-ish folk that deserve their own novellas.” 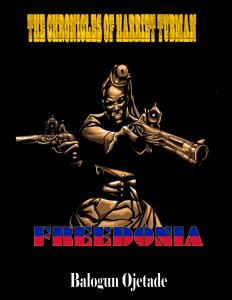 “The pulp aspects he infused into the novel gives it an extra kick like a jalapeno boiled down into a pot of collard greens. I found myself hanging on the edge of my seat not just because of the action, but because the dialogue was canny. This was not a mindless romp of action, because there are lessons be too learned…WHERE IS MY SEQUEL BALOGUN? WHERE IS MY SEQUEL?!”

“Moses: The Chronicles of Harriet Tubman is an exciting mash up of steampunk, alternate history and horror…Balogun writes in a rapid fire style with short, action packed chapters and colorful, unexpected characters. No one is as they seem and the story’s twists and turns had me feeling like I was on a wild roller coaster ride and loving every minute of it.”

“One of the most entertaining aspects of Moses is the re-imaging of historical history. No one is safe from Balogun’s imagination, and everyone ends up with a fresh identity to match the world he creates for us. The other characters are just as imaginative and vivid; my two favorites are Mama Maybelle and Black Mary. When you read the book you’ll clearly see why...So get Moses: The Chronicles of Harriet Tubman, strap on your bicycle helmet and keep your hands inside the car. You’ll enjoy the ride.”

“It’s a kickass supernatural steampunk action-adventure alternate history starring American heroine Harriet Tubman as she battles the eerily-gifted and treacherous crew led by Secretary of War Edwin Stanton, a hoard of ghouls, and the evil spirit of John Wilkes Booth. Set in post-Civil War USA. Appearances by Louis Pasteur, Abe Lincoln, Frederick Douglass, among others. Wonderfully written by a master of martial arts, with never a dull moment or a superfluous word. Can’t wait for more!”

“Balogun Ojetade continues to deliver the goods in this exciting sequel to Moses: The Chronicles of Harriet Tubman. This time Harriet and Stagecoach Mary travel to the alternate America of Freedonia to save the life of Bass Bello. As before Balogun gives us historical figures like you’ve never imagined and enough twists and turns to make a ballerina dizzy. A great read from a great writer.”

Moses: The Chronicles of Harriet Tubman

The Chronicles of Harriet Tubman: Freedonia