“Balogun Ojetade has created a fresh, imaginative and humorous tale in Jagunjagun Lewa. The story is filled with action and drama, a perfect display of Mr. Ojetade’s genre-blending style. I’m eager to see what happens next, and you will be, too.” —Milton Davis, Bestselling Author and Publisher
“The back story promises action and adventure…the artwork is phenomenal…and this comic actually had me laughing out loud. The action sequences are really well developed, where some comic fighting scenes can be hard to follow, this artist has done an amazing job in sequencing. Intelligent, comedic timing makes this book so much fun to read! I cannot wait for the next installment. Simply awesome!” —Jack Berberette, Founder of the DOTS RPG Project
“Beauty is power; a smile is its sword.”
The Gods of the Martial Arts gain power, prestige and wealth from the number of followers they possess. The Asian martial gods are most powerful and prosperous, as the Asian martial arts have long been marketed to humanity and are quite popular, even in the post-apocalyptic, afrofuturistic world of Jagunjagun Lewa.
The African gods of the martial arts, on the other hand, are so unpopular that they risk falling into eternal sleep. To save themselves, they pick an unlikely champion who, with his brother, Papio, a man cursed to live out his life as a mandrill, sets out to build the reputation and popularity of the African martial arts by defeating the best martial artists in the world. The problem is, no one wants to fight him – and NOT because of his extraordinary fighting skills.
Jagunjagun Lewa is set in a world of spring and gear technology, a world where the sword and spear are still kings of all weapons. It is a future much like, while also unlike, our past.
JAGUNJAGUN LEWA (“Pretty Warrior”) is a wild ride that will have you turning the pages and clamoring for more!
Issue #1 of this hilarious and action-packed comic book/manga, written and created by Balogun Ojetade and illustrated by Chris Miller, is available NOW in e-book and paperback formats! 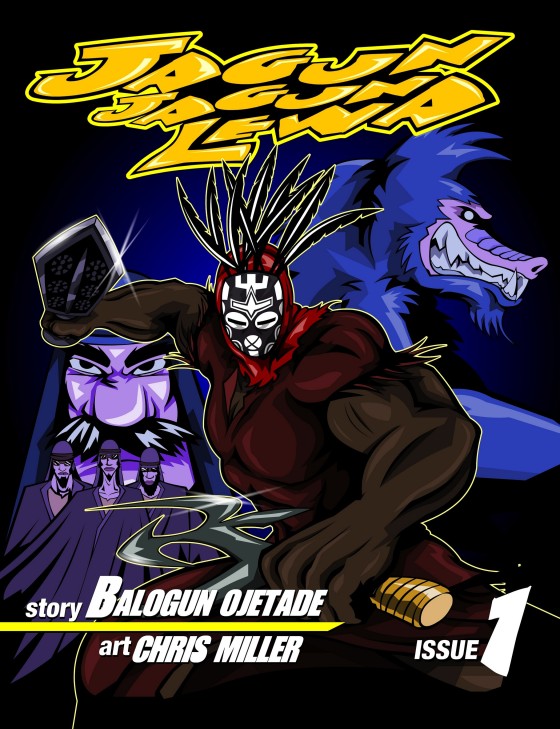